Your host for the evening… 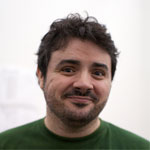 Anthony Williams is a geek, dad, website maker, karate instructor and organiser of the Leamington Multipack meet-ups. And he will be your guide through the evenings events.